Was a stone Hut with an "engine room" underneath. In it resided a generator able to give us some light at night. There was accommodation for some 8 or so people. We used to get to Thredbo where by that time the chairlift had been constructed. It took us to the top and then we went on by compass. When there was visibility it was no problem but when fog reigned it was rather touchy. In the hut there was a "drying room" consisting of a cupboard with a hook. One of our party, a lady, specialised in washing out her stockings and hanging them on that hook. Our boots underneath at least got a drink. (Photo Nos. 12 and 13 are portions of the original lodge plans showing Albina's facilities).

Lake Albina was frozen over and the scenery all around (Photo No. 8), and for that matter wherever we went, was simply stunning. Big drifts overhanging ravines, huge icicles and sheer cliffs to which the snow could not cling. One of our party was a dentist, a former Austrian and a fabulous skier although diminutive in size. Frank Leyden was always part of the gang and a whole long story had been written about this special character.

With the loss of the Lake Albina Lodge nearly 30 years ago, memories are rapidly fading as to the comfortable facilities it provided to all skiers and bushwalkers who passed that way and used it (the doors were never locked). Lake Albina Lodge offered running hot and cold water, hot showers, a flush toilet and gas cooking. When completed and fully outfitted prior to the 1952 Ski Season, it was arguably the most comfortable Australian ski touring lodge outside of the then existing ski resorts. The two portions of the original lodge plans, presented as Photo Nos. 12 and 13, will give the reader an excellent idea as to how well-appointed that lodge was.

The decision to build the Lake Albina Lodge was made at a public meeting held on 10 November 1950. Dudley Ward's completed architectural plans are dated 23 November 1950. The main feature shown on the plans that was not built, was the stone fireplace and chimney, due to the realization that all the fuel needed for cooking and for heating the lodge would have to be transported in to the lodge from Cooma and that open fires have a very low energy-efficiency, with much of the fire's heat being lost up the chimney.

An example of the magnificent scenery within a couple of kilometers of the Lake Albina Lodge is presented as Photo No. 14, which is the view of Little Austria from Alice Rawson Peak, located about 2km north-west of the lodge. 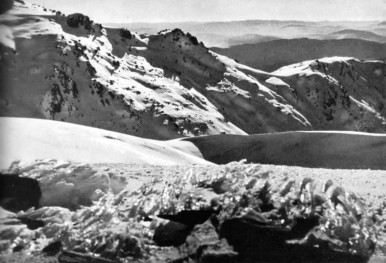 Illawong Lodge (then known as Pounds Creek Hut) is upstream from the Guthega Dam, on the Snowy River in NSW and not far downstream from the Blue Lake. We started from the end of the Guthega Road. We put on our skins and with packs on our backs, which contained enough food for the week, trudged to the hut. It was a sheet iron hut in those days before the AAC refurbished and extended it and we slept under the roof. Sometimes it was possible to cross the Snowy here on a snow bridge, but the man-made bridge installed in the 1960's, is a necessity in most winters