The following paragraphs are Will Semler's memories of skiing in Australia in the early Post War (circa 1946 to 1959), when Will was a member of the Ski Club of Victoria. He is also an AAC Member who has greatly assisted the AAC Ski Heritage Subcommittee by supplying valuable heritage material, such as historic club newsletters, for use in this AAC Ski Heritage Series. They are followed by another member's recollections of a 1950 ski trip.

After the 1939 fires there was no winter accommodation except the Victorian Railways Chalet. Built to accommodate 24 persons, we often had 30 and more staying there. It was booked from the Victorian Tourist Bureau office in Collins St. The office staff had no concept of the facilities that they were booking, since they had not been to Mt. Hotham to see the chalet for themselves.

How did you get to Mt.Hotham from Melbourne in 1946?

You caught a steam train to Wangaratta, starting on the 2nd Division of the Spirit of Progress from Spencer St at about 6PM. This was the most modern train in Australia and its 1st Division ran non-stop to Wodonga. As soon as the train pulled out of Spencer St we would start to queue up to get to the Dining Carriage, where the First Class passengers had priority.... We slowly progressed through various carriages till nirvana arrived, i.e. we were standing behind a dining passenger, salivating and hoping that person would hurry up and finish their meal.

At long last that diner would get up, but approximately at the same time as the train pulled into Wangaratta, meaning one had to miss dinner and get off the train. Hoys old bus would be waiting. By this time it would be about 10pm. This bus was a well known wobbler from side to side and also for freezing the passengers. At long last, some time after midnight, we arrived at the pub in Harrietville. On the return trip one would also stop the night specialised there and have an evening meal. At meals, the owner would command us to sit wherever he felt it was appropriate. If you did not follow the owner's instructions, you would not be served any food.

At day break there were a line of horses waiting. Some with saddles, some were pack horses for the packs and supplies and of course the skis. Off up the Bon Accord Track and in to the snow. The horses always went along the very outer edge of the track giving you the "Jimmy Brits". When the snow depth was such that the horses were sinking to their bellies with every step, we unshipped, kicked the horses in the bum and started to ski, having strapped the skins on first. The horses knew their way back to Harrietville far better than we did and the horses had no trouble in returning.

Using a horse and sleigh, a Norwegian, Eric Johnson, would haul packs and other baggage from the snowline up to the Victorian Railways Chalet at Hotham Heights, whilst we climbed on our skis. We passed the Bon Accord Hut and up to the Razor Back over the summit and reached the Chalet usually when it was starting to get dark.

One time three young chaps tried to come along. One of them was so disgusted with the effort that he hurled his skis over the edge and went back to Harrietville. He later became famous by designing the Myer Music Bowl by which time he undoubtedly forgot about his earlier travail.

A lot of people would send "grog" (usually alcoholic spirits to minimise the size of the package) up in summer, as unfortunately at that time "grog" was an integral part of the skiing holiday. In fact Eric Johnson started to supply this much sought after merchandise even in winter. He had built a shack, big enough to provide over night shelter for himself and his horse, near the Razor Back. He designed and made some snow shoes for the horse but was also famous for his cracks in his heels. He assuaged this problem by stopping every ½ hour and filling the cracks with pitch.

The Hotham Chalet (Photo No. 3) was run by a very helpful manager who, however, gave up some years later and started a service station in South Melbourne. He had a sort of kelpie dog who loved to run along with the skiers as they slid down, get hold of their stocks and thus mostly arranged a header into the snow. In summer the kelpie decided that he also needed a holiday and whenever an open tray vehicle turned up he would hop on for a ride. He would come back on the tray of another vehicle, may be a week or so later.

The main activity in the morning would be to wax the skis. Most people had their own system by which they swore. For going up we would have seal skins which were strapped on to the skis when needed. We might have say 5 or 6 runs from the top down to Swindlers Creek a day (Photo No. 4).

Quite often we would just trundle along anywhere if visibility permitted it. All sorts of names were given to the various runs by various circumstances. For instance Mr.Pink and Mrs Hamburger found one from the summit hence "The Pink Hamburger".

My brother Stephen and I only had pair of ski pants between us. We went on alternate weeks and met halfway in order to swap pants. Good friendships were forged up in the snow but, to the best of my knowledge, I am now the only survivor of those skiing friendships.

After some time the CSIR (later to become the CSIRO) built a hut for high-altitude weather observations, which were supervised Phil Law. They made important observations when they had a spell between having a good time. Later still The University Ski Club built a chalet. In some way its design was the forerunner of many built there and in other parts of the Australian Alps.

On one occasion when I was part of group going to Mt.Bogong I caught the flu or cold and decided to stay in Bright to get over it. After a couple of days I felt well enough and started going up the Bon Accord Track up from Harrietville. Clearly I ventured out of my "sick bed" too early and there were many rest stops on the way. At the end I was within sight and some 50 feet away from the Bon Accord Hut but simply could not go any further. After about half an hour of wistfully looking at the hut I was able to get there. It was occupied by two cheery Air force chaps equipped with the traditional banana bag to hold all their belongings. They immediately offered me a bed. It was one of those steel constructions with a chain link top. As soon as I mounted this steed it collapsed under me. Next they brewed some tea for me. Unfortunately the previous inhabitant of this Billy was some kerosene. After one sip I hurtled out of the hut at lightning speed. I felt better the next day and got as far as the Country Roads Board emergency hut just above the Razor Back. It had 4 bunks but there were about two dozen cheery enthusiasts over- wintering in it. There were no toilet facilities and no doubt, when the spring sun melted the snow, there would be many "brown pointers" around. Next day I ventured further and reached the Hotham Chalet, where I was welcomed as a "gate crasher" but I was allowed to stay a few days. 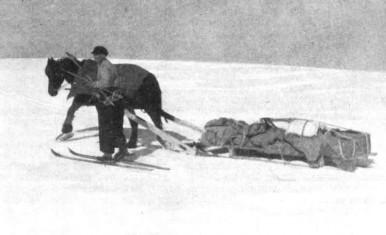