The State Electricity Commission was building a dam for the supply of power. The area was ruled with an iron hand by Mr. Williams the manager. He was afraid that skiing might interfere and would not allow any access. After a lot of talking he allowed us, that is the Victorian Ski Club, to put up a tin hut in the area now known as Falls Creek. Prior to this, a friend who was the odd man out of Brockhoff or other biscuit family, was the man who stayed in the high plains all the year to measure rain and snow falls had suggested this area as a possible skiing area. One Easter we had a working bee and tried to put up the first Armco Hut in Australia on the site. Despite all our efforts we could not manage to do so without a gap in the wall near the corner. Rather discouraged after returning, we went to the ARMCO office in Collins St.

In no time at all, they cheerfully told us that the drawings were wrong! 3 weeks later a new working bee girds its loins only to find that the hut had disappeared. On the grapevine we found out that the SEC lads had simply taken it and planted it for their own amusement on Spion Kopje (a mountain on the other side of the valley to Falls Creek. Now came a SCV master stroke in diplomacy. Instead of complaining, probably without any result, we officially donated the hut to the SEC and staff.

From then on the SEC was helpful and Falls Creek development started. We never went to look at the hut but presume the lads would have had no trouble without drawings!

In the high plains area there were a few cattleman's huts e.g. Wallace's. The scouts also built one near Mt.Cope. I remember a memorable occasion when the Rover Scouts, after doing their duties received the command: "Rovers you may now smoke." Photo No. 5 shows the Rover Scout Lodge and Photo No.7 shows a typical snow scene on the Bogong High Plains. 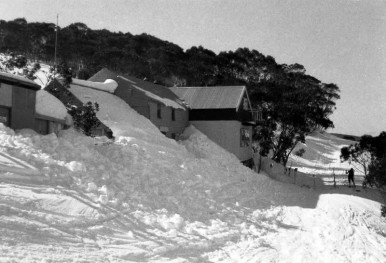