The suggestion of holding "a summer slalom race" on the snowdrifts on the south-eastern side of the Kosciuszko Main Range "every Boxing Day – snow permitting" was first made by Margaret and Charles Anton in an article titled "Drift Ski-ing in Mid-Summer" in the 1949 Ski Year Book, which describes their use of horses (from the Chalet Charlottes Pass) to access these drifts over the Christmas – New Year Period (Photo No.9). The article indicates that Charles had been skiing the drifts every Christmas Holidays, starting in 1946. In some years in the 1940's, 1950's and 1960's, there could still be quite a good cover of snow at Lake Albina in December (Photo No.10), and there was Photo No. 9 Mid-Summer Drift Skiing onMt. Northcote, 1948 (M.E. Anton) Photo No. 10 Lake Albina Lodge in December 1960 (Warren Peck) often a very large snowdrift on the south side of Mt. Northcote (near Lake Albina), even in those years of average snowfall. The AAC Summer Races were usually held on the Sunday between Christmas and New Year, with the first Mid Summer Races on 29 December 1951. That race was held on the South America Drift, 1.6 km in length, on the south side of Mt. Northcote, so named because of its characteristic shape (Photo No. 11). On five occasions in the first twenty years (1954, 1959, 1961, 1963 and 1969), the race was cancelled due to the drifts being too small to host a slalom ski race. For one of the races, when horses were still allowed in the Kosciuszko National Park, an entire riding school was able to ride over to the South America Drift from Seaman's Hut, to watch skiers hurtling down the snowdrift in summer.

The 11th Mid Summer Races were able to be held at Thredbo on Sunday 27 December 1964, in bright sunshine adjacent to a chairlift, thus making the races easily accessible for the first time, to the more than one thousand spectators who rode up the chairlift from the village, many dressed in colorful summer clothing. Charles Anton, dressed in "Summer Attire", was the course announcer. It was even possible to include a ski jumping event in the program. The results are summarized in the tables that follow.

Well-known author, Elyne Mitchell, was the first Australian to win a major ski race event abroad, when she won the Canadian Women's Downhill Championship at Banff in 1938 (Photo No. 13). It was a very credible effort for her to compete 26 years later in the Ladies Albina Summer Slalom at Thredbo and to win third prize. Elyne's daughter, Indi, won second prize and 13 year old Annette Szeloczky of Thredbo Village won first prize. Sir William Hudson presented prizes to the summer race winners (Photo No. 14).

In AAC Bulletin No.41, Vol.15, (January 1965) Charles Anton paid tribute to the race committee of the Ski Council of NSW, the operating company Kosciusko Thredbo and "the help of stalwarts such as Tony Sponar, Bob Arnott, Paul Reader, George Derschko, Beppi Gutknecht, David Crozier, Karel Nekvapil, Frank Prihoda plus many others".

Charles also wrote, "After the successful conclusion of the races, the prizes were presented by Sir William Hudson, Commissioner Snowy Mountains Authority and President of the Australian National Ski Federation. This was Sir William's last official act as ANSF President . One often wonders how many NSW skiers realize what a tremendous debt we owe to Sir William Hudson's vision and his devotion to the Snowy Mountains Area. It was his early recognition of the great tourist potential which his new roads presented and his selfless assistance to those of us who in the 1950's planned the first commercial developments, that made the initial breakthrough at Thredbo possible. Thredbo Village and thus all the other commercial ski areas in the Snowy Mountains which followed in our wake, to no small extent owe their existence to Sir William Hudson." 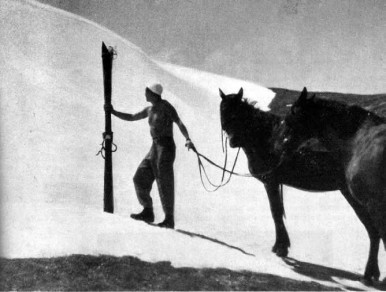