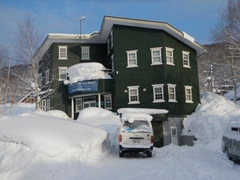 (The localities named in this Chapter, are shown on the Mt. Bogong Map)

To understand why Mount Bogong (1984 m), Victoria's highest mountain, has not been developed as a ski resort, it is necessary to look back to the 1930's and 1940's, the period over which it became clear that Mount Bogong was frequently impacted by severe blizzards that threatened the survival of any skier or walker who happened to be on the exposed upper mountain slopes when this wild weather arrived.

At 8.00am on Saturday August 8, 1936, three experienced Victorian ski tourers - Cleve Cole, Howard Michell and Mick Hull - left their camp near the banks of the Big River to climb the 1060 vertical metres to the western end of the summit ridge of Mt. Bogong. The weather deteriorated markedly as they climbed, encountering very dense fog, driving sago-snow, gale-force winds from the North-West and icy snow conditions on the plateau-like summit ridge. Navigation was almost impossible with the very poor visibility (less than two metres) and, as they had not made any tracks in the icy surface, it was not possible to return along their tracks back down to the more sheltered valley of the Big River. They tried to get off the mountain by any spur they could find, but each attempt ended on the edge of sheer cliffs.

They found a gully which provided some slight shelter on a 25 degree slope and dug a snow cave in which they spent 3 days and 4 nights while the blizzard continued to rage outside. With food running low, further efforts were made to find their way off the mountain via the Summit Cairn and the Staircase Spur to the Bivouac Hut. The wind was howling in fierce gusts and with the visibility no more than 18m and often less, they stumbled across the Summit Cairn, but could not find the Staircase Spur. After a series of descents that always ended in steep rocky cliffs, they accidently descended the South side, instead of the intended North side, ending in the valley of the Big River. They had probably been blown completely off course by the howling wind. Cleve Cole was in poor condition and Mick Hull volunteered to stay with Cleve whilst Howard walked down the river to seek help.

Howard Michell reached a farmhouse in Glen Valley on Monday morning 17 August and immediately triggered a search for his two companions, whom he had left two days earlier to summon help. Unfortunately, four hours after his rescuers had carried him into the village of Glen Valley, Cleve Cole died from the adverse effects of his exposure to the extreme blizzard conditions on Mount Bogong and its aftermath in the very rugged terrain of the Big River.

The Victorian skiing community was shocked not only by death of Cleve Cole and the frostbite suffered by his two companions, but also by the severity of the conditions they had experienced. Snow pole lines were then constructed on Mount Bogong to guide skiers to safety, particularly in poor visibility, and refuge huts were built, including a substantial hut dedicated to the memory of Cleve Cole.

However, when a further tragedy occurred on Mt. Bogong in 1943, the Victorian ski community started to seriously question whether that mountain should be developed for general skiing or remain a wilderness area. At 12.30pm on Monday August 2 1943, a party of three skiers (Georgine Gadsden, John McRae and Edward Welch) departed Bivouac Hut on the Staircase Spur (4,900 ft./ 1493 m ) bound for Summit Hut (6,410 ft./ 1954 m) where they planned to spend the night, with the Cleve Cole Memorial Hut being their ultimate destination. Between them they carried sufficient food to last about five days and their packs weighed from about 15kg (Gadsden) to about 22kg (Welch). Snow was falling, a strong north-westerly wind was blowing and visibility was about ten metres, but the party did not consider conditions unduly severe. Ian Lenne and four other skiers chose to remain at Bivouac Hut and wait for some improvement in the weather.

After making an attempt to follow the first party the next morning, Ian Lenne's group returned to Bivouac Hut in very poor weather conditions and remained there for two more nights whilst a blizzard raged on the mountain. "There is often a rapid increase in the severity of conditions on the Staircase Spur once the tree line is left behind. Such is the architecture of the mountain at this point that, having left the comparative protection of the trees and sidled around the twin knobs of Castor and Pollux, one suddenly runs into a numbing blast of wind-driven snow at Gorge Gap". (The view up the Staircase Spur from Gorge Gap is shown in Photo No. 16.) "A few apprehensive steps further and one is locked into the final climb onto the Summit Ridge. The first section of this is particularly steep. In order to proceed, it is often necessary to resort to the particularly exhausting procedure of kicking steps. For each gain in height there is frequently an alarming increase in the severity of the conditions. One seems to be climbing into a nightmare. The wind at times blows downhill, sometimes bringing the climber to a halt and on occasions blowing him backwards. Progress slows to a few steps at a time." (Geoff Schirmer writing in WILD, Oct-Dec 1981).

On Thursday August 5 it was still snowing but with a moderating wind. Lenne's group headed once more for the Summit Hut. Following the snow pole line on very icy slopes, about five hours after leaving the Bivouac Hut, they came across the three frozen bodies of the members of the first party lying in the snow at the last visible snow pole, about 80 metres from the almost completely buried Summit Hut. Had the first party also taken five hours in the blizzard conditions to reach this point, they would have arrived at the last visible snow pole as daylight faded at about 5.30pm.

Edward Welch was lying face downward with his pack still on his back. About two metres further up the slope was John McRae's body lying against his pack which was still strapped to his back. Georgine Gadsden's body was a further two metres up the slope, lying on her back on her pack which evidently she had removed so she could better assist her companions.

A contemporary account of the tragedy (SCHUSS September-October 1943) suggests that Welch may have been stationed beside the last exposed snow pole whilst Georgine Gadsden and John McRae had been looking for the next snow pole and/or the Summit Hut. Unfortunately it seems possible that Welch collapsed whilst standing at the last exposed snow pole, because he still had his pack on his back and had fallen face-first into the snow. Welch was the only member of the party to have previously visited the Summit Hut in winter. McRae, possibly also on the point of collapse, might have sat down nearby. The posture in which he was found was judged to be "consistent with his having endeavoured to rise, but, being unable to do so, had then been given the brandy flask. That it may have been dark is possibly suggested by the finding of a torch in the snow near the bodies. . . . In such circumstances, Miss Gadsden would be well-nigh exhausted, bitterly cold, and alone in a strange place under terrifying conditions. She would undoubtedly be loath to leave her companions, but even should she have realized that the only chance of saving her own life lay in a retreat down the spur to the shelter of Mountain Creek, then she would be faced with having to make a descent into the full force of the north-westerly blizzard on an icy surface, with no one to assist her to find her way from one snowpole to the next. It seems that Miss Gadsden chose to remain with her companions . . . . ."

This sad experience underlined for once and for all, that although Mt. Bogong is Victoria's highest mountain and is capable of providing magnificent ski runs in good weather, it is utterly exposed in bad weather and lacks sheltered access. It is a mountain for ski mountaineers and experienced skiers; it is definitely not for family groups with small children who are learning to ski. 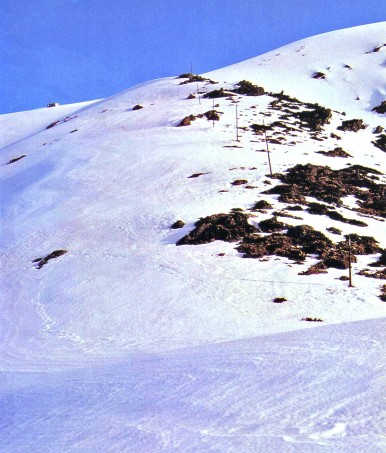