Construction of the Kiewa Hydro-Electric Scheme by the State Electricity Commission of Victoria (SECV) had commenced prior to World War 2, with the construction of the Bogong township, the first dam (Lake Guy) and the Clover Flat hydro station. Work commenced in 1946 on the major tunnels and dams on the Bogong High Plains that fed water to the power stations in the valleys below. This required a network of all-weather roads linking the construction sites to the camps. The road from the SECV construction camp at Howman's Gap (1200m altitude) to Rocky Valley Dam and camp (1615m altitude) crossed the Falls Creek, which drained a large, sheltered snow basin that faced east.

In 1947 the Skyline Ski Club, founded by some SECV staff members, built the first ski lodge at Falls Creek. The next year, the Bogong Ski Club, which had been formed in the early 1940's for SECV employees, built a clubhouse in the Falls Creek basin (to hold about 80 persons) at a level of about 80m above road level. Through the efforts of Tom Mitchell M.L.A. (husband of Elyne Mitchell), the Falls Creek gully was opened to Permissive Occupancies by bona fide ski clubs. The Ski Club of Victoria (SCV) obtained a Falls Creek club building site close to the SECV Rocky Valley Access Road but, to avoid the problems of obtaining materials (then in short supply) bought the nearby Skyline Lodge.

The Albury Ski Club erected a small building on their block during the 1948-49 summer and built their main clubhouse the following summer. In 1949-50 the Myrtleford Ski Club laid its foundations and then built its lodge over the succeeding years, as money and building materials became available. Lodge numbers slowly increased – Bob Hymans' Ski School, Kiewa Valley, Nissen Ski Tow, Dawn, and Morona-Towilla were all operational by Winter 1953.

In the early years private cars were not allowed beyond Mt. Beauty in winter, due to the slow-moving, oversize, heavy construction traffic using the various access roads, particularly the steep (6% gradient) and winding Rocky Valley Access Road. Buses shuttled skiers to Falls Creek from Mt. Beauty, where their private cars had to be parked. By 1953, the SECV was issuing entry permits for private cars used by skiers with bookings in a Falls Creek lodge.

By the 1954 Ski Season, Falls Creek Alpine Village had 10 club lodges, plus a ski tow house and a commercial lodge that both provided skier accommodation. Several other club lodges were under construction. The Nissen Alpine Club operated a rope tow with a 240m rise in altitude. Bob Hyman's commercial lodge had its own ski school that provided tuition to all Falls Creek skiers that wanted lessons.

A special feature of the ski runs in the Falls Creek Bowl prior to 1970, was the water race line – a wide, deep channel that collects run-off water for utilization in the Hydro-Electric Power Scheme. This race line crossed the Falls Creek ski runs near the bottom of the longer ski slopes. The race line would get covered by snow in mid-winter, but the resulting snow bridges were prone to collapsing as a skier passed over them. Numerous skiers from the pre-1970 period, finished up standing knee-deep in icy water, as a result of missing one of the timber bridges over the race line that had been built by the pioneering skiers. The less lucky skiers fell full-length into the icy water! Eventually the entire 2km length of the race line at Falls Creek was bridged. 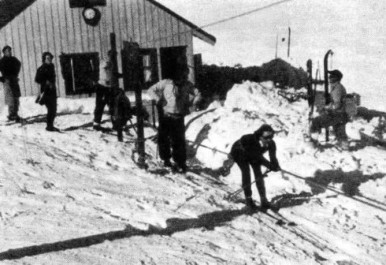