The Tallangatta Ski Club (TSC), initially comprising 117 members from the extensive district surrounding Tallangatta, was formed in December 1947 and affiliated with the North-Eastern District Ski Association (NEDSA). The most accessible high country close to Tallangatta is Mt. Wills (altitude 1755m), 102km south of Tallangatta. The Razorback Spur provides the easiest access to the plateau and to the summit of Mt Wills. In 1948 the TSC constructed its ski lodge at 1500m altitude on the Razorback Spur about 1.5km along a vehicular track from where the Omeo Highway crosses the Razorback Spur at 1340m altitude.

From this point there is an easier and more sheltered approach along the Wills Spur, shown on the Mt. Bogong map (rising about 250m in about 10km length) to the Cleve Cole Hut on Mt. Bogong, than is afforded by the Staircase Spur. The club lodge was constructed largely from timber growing on the lodge site. The lodge has a sawn and split-timber frame, walled with split slabs standing vertically, on "round-timber foundations", measuring overall 9m by 4.5m, divided into three rooms. The lodge was at the "lock-up stage" by 3/7/1948. It operated its own rope tow in the 1954 ski season. 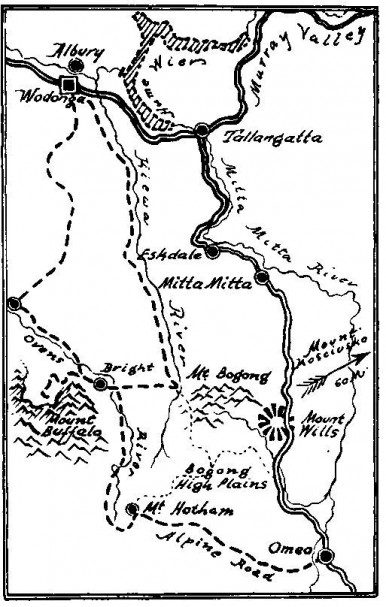