The only skier accommodation on Mt. Hotham in the 1930's was the Hotham Heights Chalet (Photo No.6). The January 1939 bushfires destroyed it, along with the nearby Mount Saint Bernard Hospice. In a Herculean building effort, a new Hotham chalet was opened in four months by the Victorian Railways (Photo No.7). In the 1939 ski season, it could only accommodate 27 visitors, but it was progressively extended until it could sleep about 80 persons.'

Winter access remained a problem in the 1940's and 1950's (the years prior to the arrival of large snow ploughs in North-Eastern Victoria). From the Harrietville side, the most direct winter access to Hotham involved riding horses up the Bon Accord Spur to the snow line (Photo No. 8), where the skiers donned their skis (Photo No. 1), to which they had attached climbing skins, or similar, whilst they climbed up to the summit of Mt. Hotham. They then skied down to the Chalet about 1km to the east of the summit. Baggage was hauled from the snow line to the Hotham Heights Chalet by horse sled (Photo No. 9). Road access on the Omeo side of Mt. Hotham was usually only available as far as Cobungra Station, from where it was necessary to walk/ski about 20 km to Dinner Plain (which had emergency accommodation in a cattleman's hut, if it was needed) and then a further 9 km to Hotham Heights. Photo

In 1947 the Country Roads Board (CRB) commenced using a Matador truck, with snow-plough blade mounted on its front, to clear as much of the Hotham Road from Harrietville as possible. In the heavy snow year of 1947, it only ever reached a point about 6.5km below Mount St. Bernard, itself a 10km walk from Hotham Heights. Hence the horses on the Bon Accord Spur remained the main means of Winter access. But by 1950, the plough was able to reach the CRB camp at Mount St. Bernard for the entire winter, and the horse access system was terminated. This left the skiers with the 10km long, arduous and risky trek from St. Bernard to Hotham Heights, nearly all of it above the tree-line. This route was exposed to the full-force of the bad weather, particularly the storms coming from the north-west. It did become so icy on occasions, particularly on the very steep and exposed slopes of Mt. Blowhard, that skis could not grip the slope in the icy conditions and skiers had to kick steps into the ice, whilst carrying both their packs and their skis.

Lindsay Salmon's "Drift Chalet" opened in 1952 as the second commercial chalet on Mt. Hotham, with accommodation for up to 45 guests. An insight into its operation was given in a 2009 interview by Ms Joan Graves, who worked there as a cook's assistant in the 1955 ski season. Joan had walked in from the Harrietville side, on a sunny day in July 1955, to commence work. Lindsay Salmon's staff members were accommodated in the poorly heated, very lowest levels of the chalet. Joan said she was lucky to get out of the Chalet to go skiing for a couple of week-day afternoons each week. With a Saturday changeover, she was busy all weekend washing linen, as well as serving afternoon tea on Saturday afternoon to the new arrivals.

Many guests would drive to Omeo on the Friday night and stay overnight in one of the hotels there. They would depart early on Saturday morning and drive to Cobungra, so that the snow was still firm and easy to walk on, when they started their 29km walk/ski to Hotham Heights.

There was no Ski Patrol and no Ski Rescue service. In 1955 a Drift Chalet guest suffered a spiral fracture to one of his legs whilst skiing on the Blue Ribbon Ski Run. He had to lie in the snow whilst his ski companions skied to the Hotham Heights Hotel for an Akja Rescue Sled. The leg was splinted with clothing (no bandages available) and he was taken to the Drift Chalet.

Blizzard conditions set in overnight and the injured skier spent an uncomfortable night on a bed in the Drift Chalet. A holidaying doctor, who was staying as a guest at the hotel, was located the next day and he came to the Drift Chalet to set the broken leg. A sled was located that was suitable for six of his fellow skiers to drag the injured man the 10km to Dinner Plain. There were three skiers at the front and three at the back to steady the sled on the downhill descents. A photo of a 1950 evacuation of an injured skier is presented as Photo No.10. Five skiers can be seen, wearing belts linked to the sled by ropes.

A 4WD tray truck, driven by local identity Fred Ward, met the party at Dinner Plain and the sled plus patient was strapped securely onto the tray of the truck for the 20km descent over snow down to Cobungra, where the ambulance from Omeo awaited them. It had taken a total of 12 hours to evacuate the injured skier from Hotham to the Omeo Hospital.

The first club to build at Hotham was the Alpine Club (Melbourne) whose 14 bed lodge was built in the first few months of 1946. The walls of the ground floor are of attractive local stone and the upper storey is of timber sheeted with fibro-cement, whilst the roof slopes at a very shallow angle so as to retain the snow and so help retain the warmth within the building during the ski season. A water spring was located on the slopes of Mt. Higginbotham behind the lodge, that provided water to the lodge with a head of 8m for the 20 years prior to the installation of a reticulated village water supply. The lodge of the University Ski Club (Photo No.11) was built to a similar design nearby in 1948. Like Alpine's lodge, its design minimised the length of walls that were exposed to the weather, whilst its gently sloping roof retained snow for warmth.

In 1947, the Edelweiss Club bought an existing prefabricated building in Gippsland, dismantled it, loaded it onto two trailers and took it to their block in the Davenport Area of Hotham, via the very steep Cobungra Hill. The building was completed and made reasonably weather-proof over the June King's Birthday Holiday weekend and it operated reasonably well at first. Unfortunately, the 1947 Ski Season was a particularly heavy one and by September there was four metres of snow on the roof causing some of the cement roofing sheets to crack and leak. Then, in a November storm, half of the roof was blown away ! After several work-parties had repaired the damage and cleaned up the sodden lodge interior, the lodge worked well!

The members of Wangaratta Ski Club were concerned at the time-consuming and difficult Winter access to Mt. Hotham for skiers travelling from Wangaratta, that often involved delays of a day, or more, due to bad weather. In 1947 the Club established its own lodge at Mount Saint Bernard (Photo No.12), at an altitude of 1500m, which was expected to be the limit of snow-clearing on the relatively sheltered access road from Harrietville in winter. The club has since installed its own rope tow and, for the 1954 ski season, installed a safe snow pole line from Saint Bernard to Hotham. There is also the possibility of ski touring from Mt. St. Bernard along the Dargo High Plains Road to the south and also along the Twins Road to the south-west of the club hut. Another ski touring option is to ski east down into the Dargo River from the top snow pole at the north end of Mt. Blowhard, where the snow can last well into Spring. 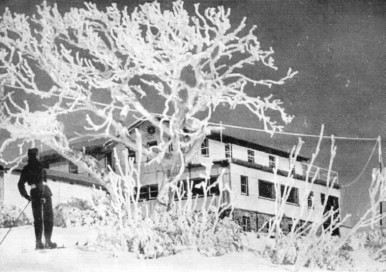